Louis de Monard was born in Autun, Burgundy into an aristocratic family whose sons traditionally pursued a military career.  Louis, however, grew up with a passion for nature, hunting and horses. He was extremely talented at drawing and had ambitions to become a poet. In 1897 the scandal caused by his liaison with a lower class married woman forced him to leave home and move to Paris. As soon as he arrived in the capital he fell in with a circle of bohemian writers. He published a few poems, exhibited several much acclaimed drawings, painted some fans and wrote newspaper articles on horse racing, bullfighting and other sport and animal related subjects. He also took up Animalier painting and discovered that he had a vocation as a sculptor whilst he was modelling a panther in wax prior to painting it.  He was therefore a very much self-taught sculptor and he took his subject matter mainly from the world of hunting with which he was thoroughly familiar: horses, dogs, eagles, wild boar etc. He exhibited his first pieces of sculpture at the Salon des Artistes Français in 1902: these consisted of five small items  (three horses, a wild boar and a dog) four of which were purchased by the director of the influential review L’Art. He was approached by various editors and chose Houdebine to market eight models. He also gave Hébrard some pieces after 904. His career had a near meteoric rise, his talent being assisted by his natural entry into wealthy and influential circles. His Cob irlandais was presented in 1905 by Président Loubet to the King of Italy. That same year he left the Artistes Français and began exhibiting at the Salon of the Société Nationale des Beaux-arts where he remained for the rest of his career.

In 1909 he took up garden art in the form of decorative containers. He exhibited regularly in Paris, in the provinces and also abroad (United States, Germany, Argentina, Belgium, Hungry, Spain, Switzerland, Egypt, Canada).

Before the war he took an almost pagan view of animals seeing them as a kind of dynamic mysterious link between man and nature with a vital essential force. During the First World War, he was put to work in camouflage where he came into contact with a circle of artists and took up the habit of making daily notes on his thoughts on art, previously unpublished. In the 1920s, his art became suffused with a new humour and gaiety. After 1925, he looked to attain denseness through simplicity endowing his animals with monumental dimensions in which the former liveliness was replaced with a new solemnity and majesty: L’effraie, a large owl 2.5 metres high 1925,  Les Vautours, a stone monument in Volvic lava  3 metres high in the  square des Batignolles Paris, considered his master piece, Lionne et Lionceaux in  Bagnères-de-Luchon. The Sèvres factory produced several editions of his pieces: Centaure à la conque, Femme jouant avec un chevreau, centaure au sanglier, two models of Chevreau and finally Chien au crabe (see illustration).  He continued to heap up honours: he became administrator of the Société Nationale des Beaux-arts in 1924 and acted as president of the examining board in 1930 and the sculpture jury in 1936. He also became a member of the sculpture jury of the École des Beaux-arts in 1927. He was decorated with the Légion d’honneur in 1932 and won the prix Puvis de Chavannes in 1933. He acted as spokesman for Group VI and was a member of the international jury des récompenses at the Exposition internationale of 1937. Finally, in 1936, he saw his life’s work celebrated in a large solo exhibition in the rotonda of the grand Palais.  However towards the end of his life, the critics grew more lukewarm towards his art deeming it too far removed from the tenets of modernism.  He took up painting again and died in Paris somewhat embittered in 1939. He is buried at Bois-le-Roi, near the property where he had his atelier in a large barn beside his favourite subjects :horses, dogs, goats and a large aviary with a vulture. His sculpture, as recorded by Jacques Thomas, numbers 159.  Following the closure of the maison Houdebine in 1909, de Monard had his bronze editions cast by Claude Valsuani, Attilio Valsuani, Rudier, and finally Susse.  In 1927, he also made a contract with the editor Lecaplain for five models. As a man of independent means free of financial constraints, Louis de Monard could afford to have his editions produced in very limited numbers and always insisted on impeccable quality. His work was bought by numerous museums the best-represented being Vernon, Autun, Bois-le-Roi and Dijon. 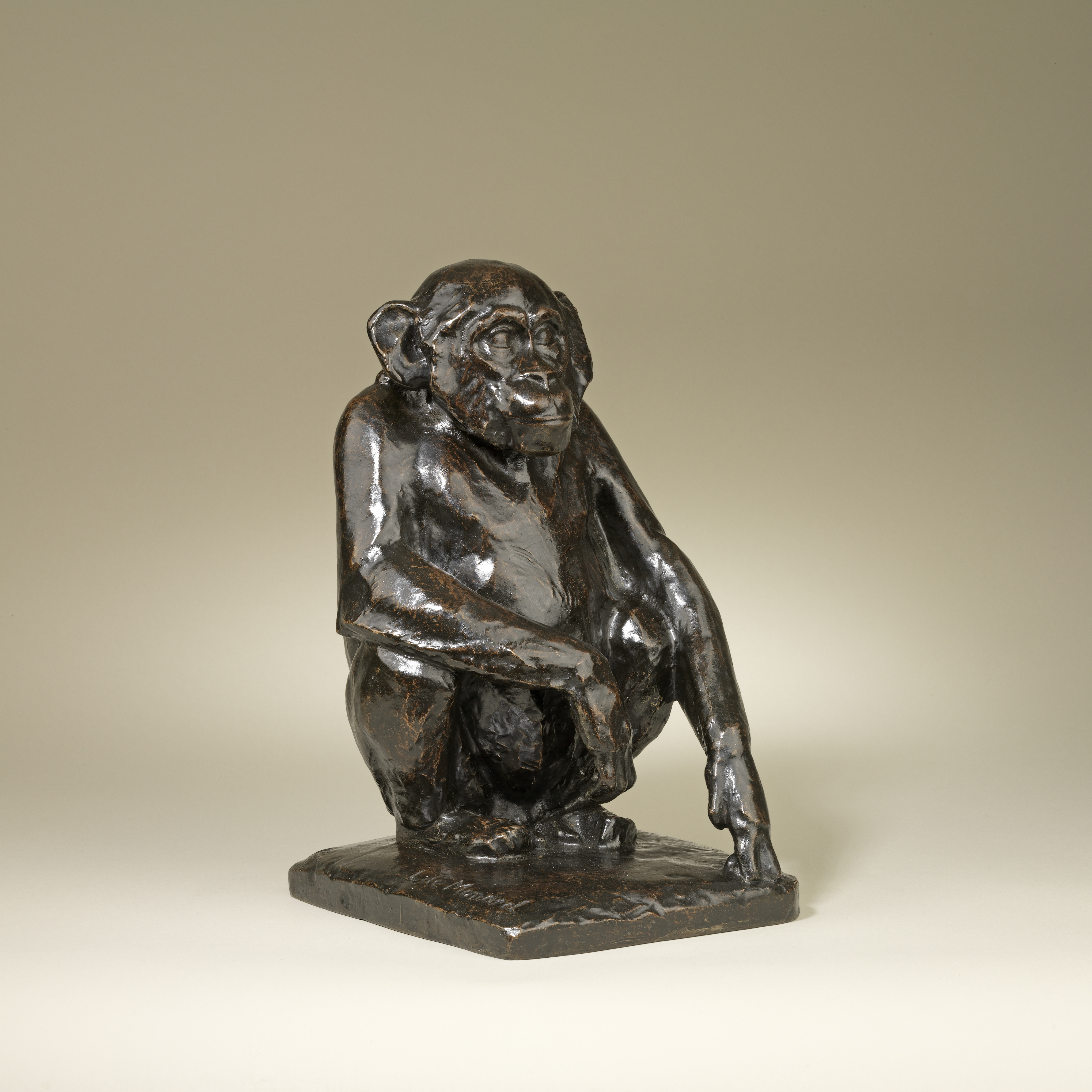