Charles Delhommeau was born in Paris in 1883 where his father worked as a civil servant. Little is known about his early artistic studies, but he first exhibited at the ‘Salon des Artistes Français’ in 1904, showing a plaster of a Cat by the fire. In 1913 he exhibited at the ‘Société Nationale des Beaux-arts’, becoming a member some considerable time later in 1932. He exhibited in both the ‘Fine Arts’ and ‘Decorative Arts’ sections of the salon, larger animals such as Gazelle, Tigre and Panthère in the former and smaller subjects such as Aigrette, Pigeon and Cobaye in the latter. His work regularly featured in exhibitions at the ‘Société Nationale des Beaux-arts’ where he later became president of the sculpture department. In 1932, he won an award from the ‘Society for the Encouragement Art and Industry’ in recognition of his achievements in art and design. At the Exposition Internationale of 1937 he exhibited a large bas-relief entitled La Menuiserie, which was six metres in length, displayed on the façade of the Furnishings Pavilion.

In 1938, on the recommendation of his friend, the sculptor Louis de Monard, he gave the Sèvres factory a model of a female nude, Après le bain. He also modelled several figures in chamotte clay; Lapin, Lémurien, Panthère et cygne, Tigres; which he and the factory agreed to sell these on a shared basis. In 1941, again on the recommendation of de Monard, Delhommeau submitted to the Sèvres factory a table centrepiece, representing the twelve months of the year, with a central figure of Apollon sortant de nuées. The factory offered the state the opportunity to purchase the piece, stating that it would be made by those responsible for the restoration of Degas’ waxes, much valued for their skill and technical merit.  Delhommeau quickly submitted his curriculum vitae outlining the role he had played in the restoration of the waxes. Whilst Bartholomé was the official restorer of the waxes following the death of Degas in 1917, (assisted by Palazzolo, who was foreman in Hébrard’s atelier) it is probable that Delhommeau worked with them as a practitioner. At this time, the Sevres factory was going through hard times with its production in decline. The table centrepiece was commissioned and the thirteen porcelain pieces were delivered to the French government in the December of 1942. Between 1946 and 1956 the French state regularly purchased his terracotta sculptures. These were mainly female figures but they also acquired two Animalier pieces: a terracotta of a Recumbent Panther in 1949 and a bronze Gazelle in 1954.

Delhommeau produced relatively few Animalier pieces, observing the wild animals in the Jardin des Plantes and the Zoo at Vincennes. Influenced by Rembrandt Bugatti, he was concerned with capturing their flowing lines and vivacity as opposed to their ferocity. In the execution of his sculpture he completed numerous preparatory drawings, watercolours and oils and therefore he has also acquired a reputation as an Animalier painter.  Most of his work was cast by Leblanc-Barbedienne using the lost wax process and his editions, always limited, were without fail of the finest quality. 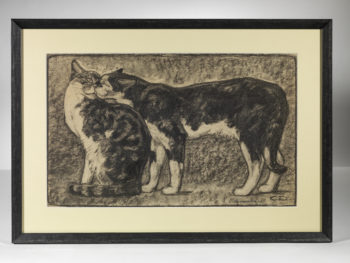 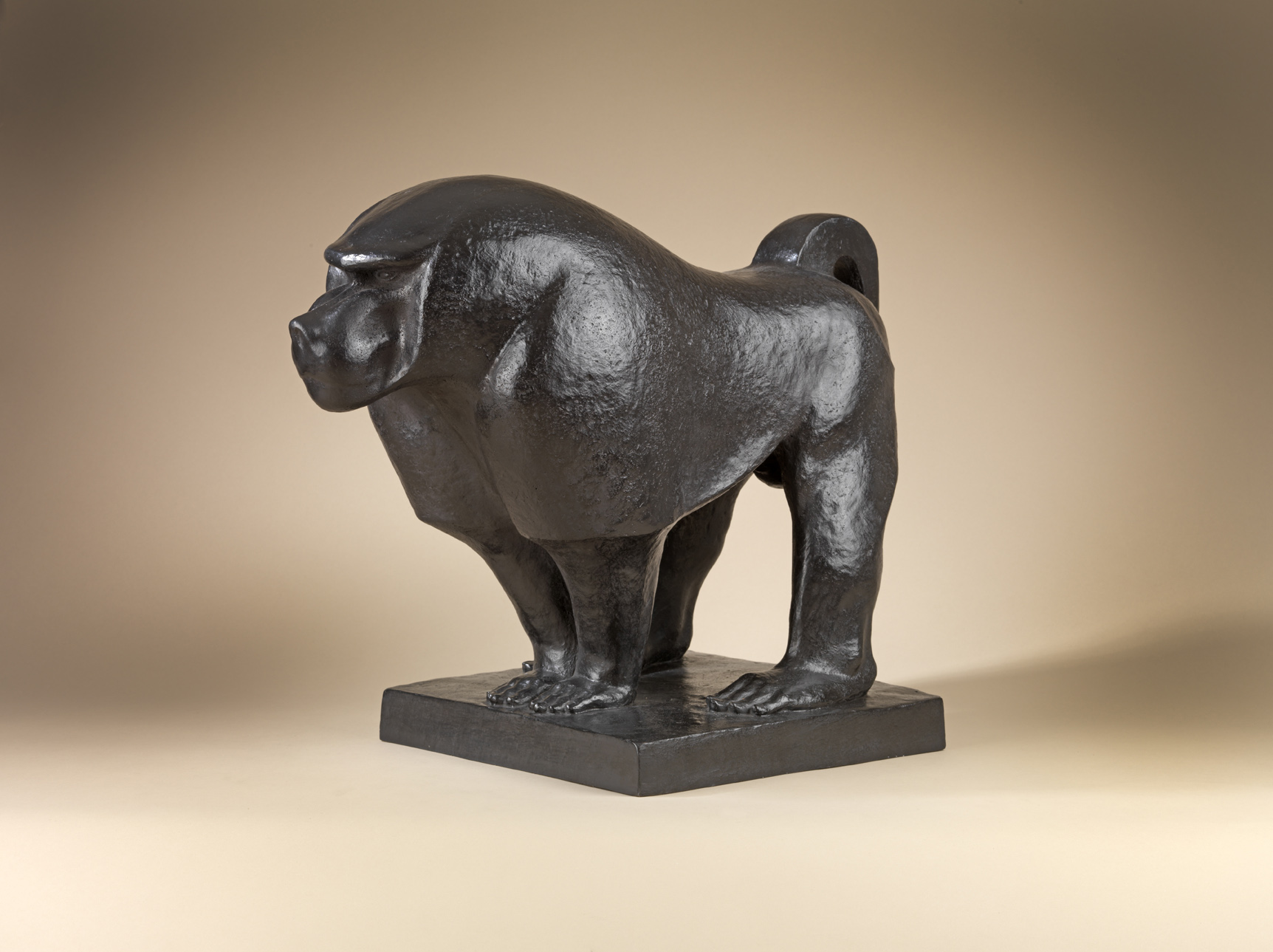 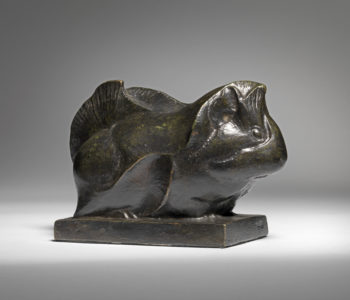 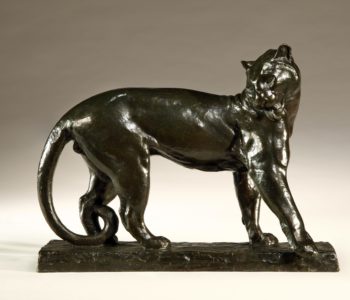 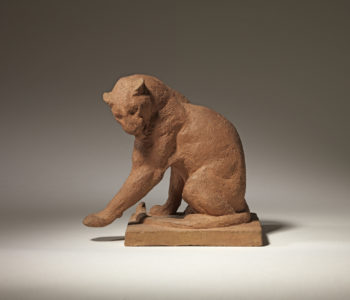 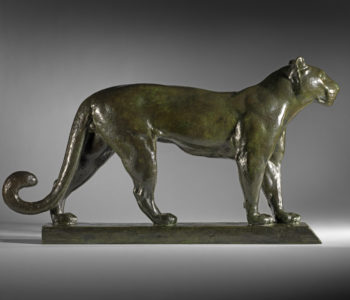 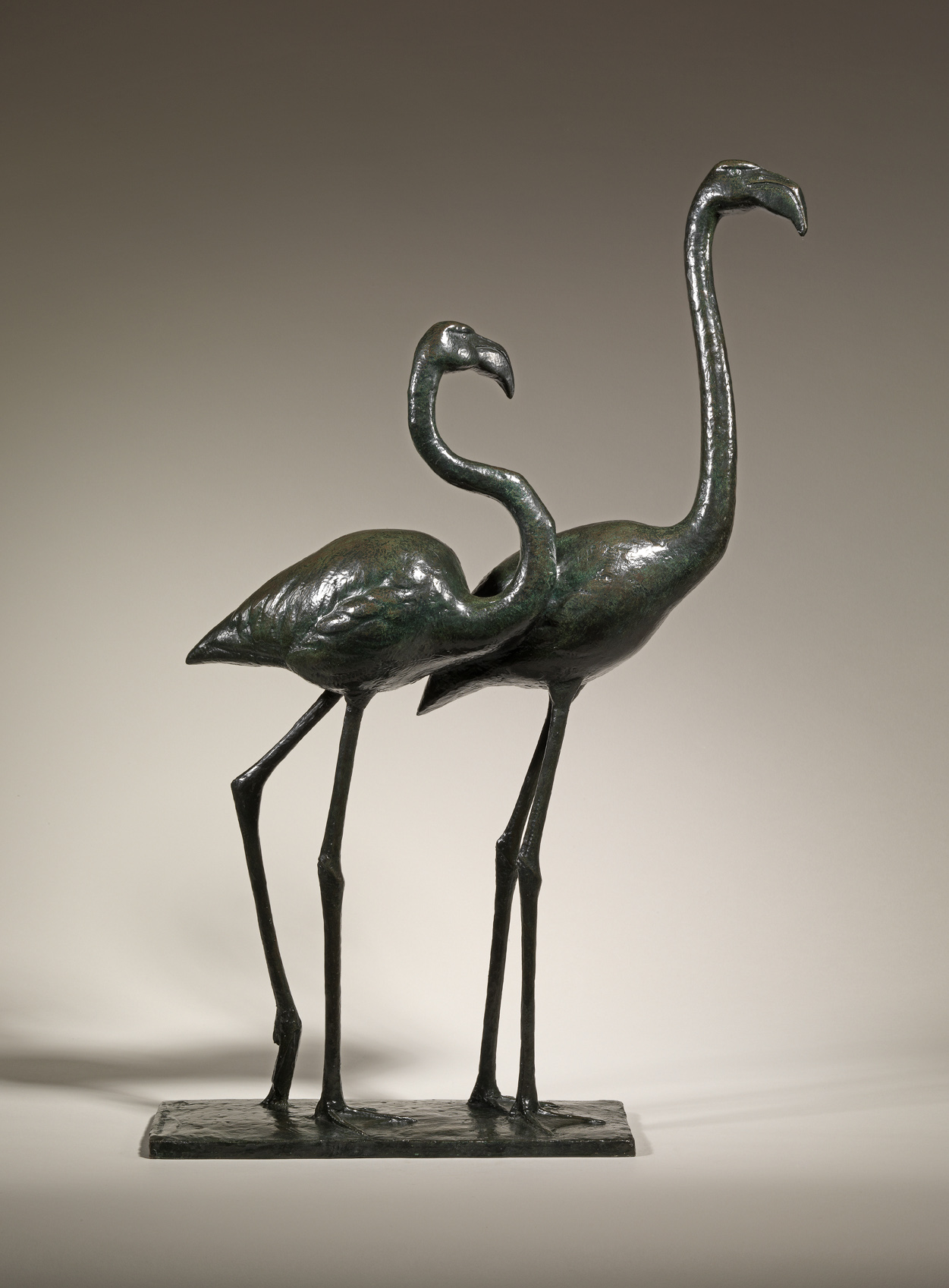 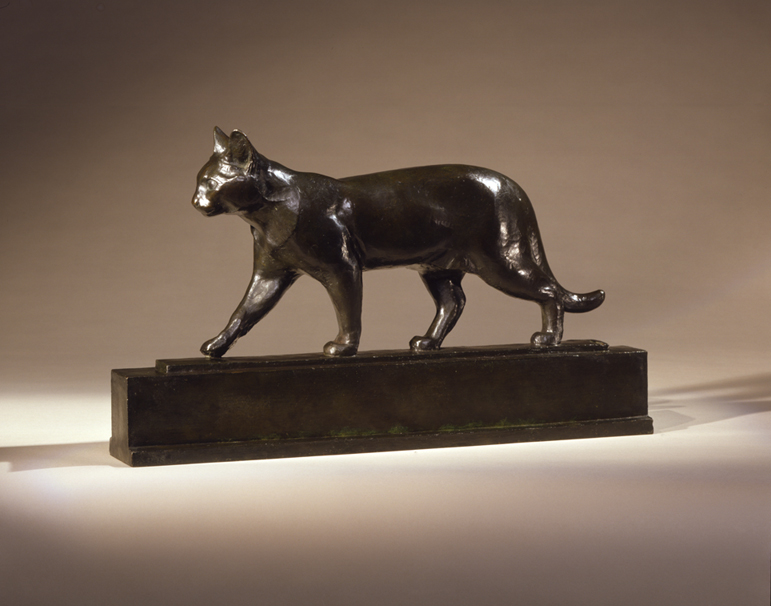 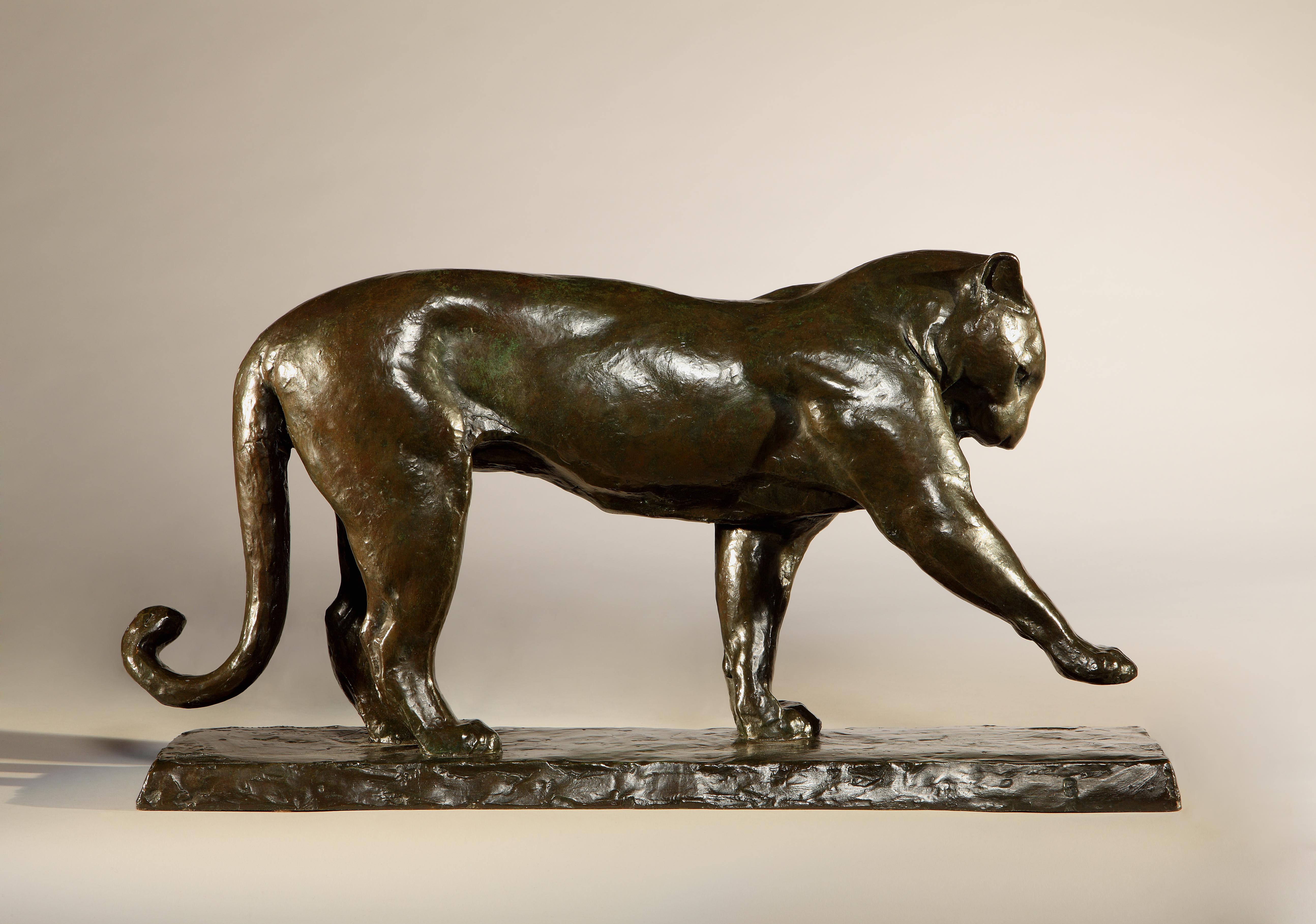 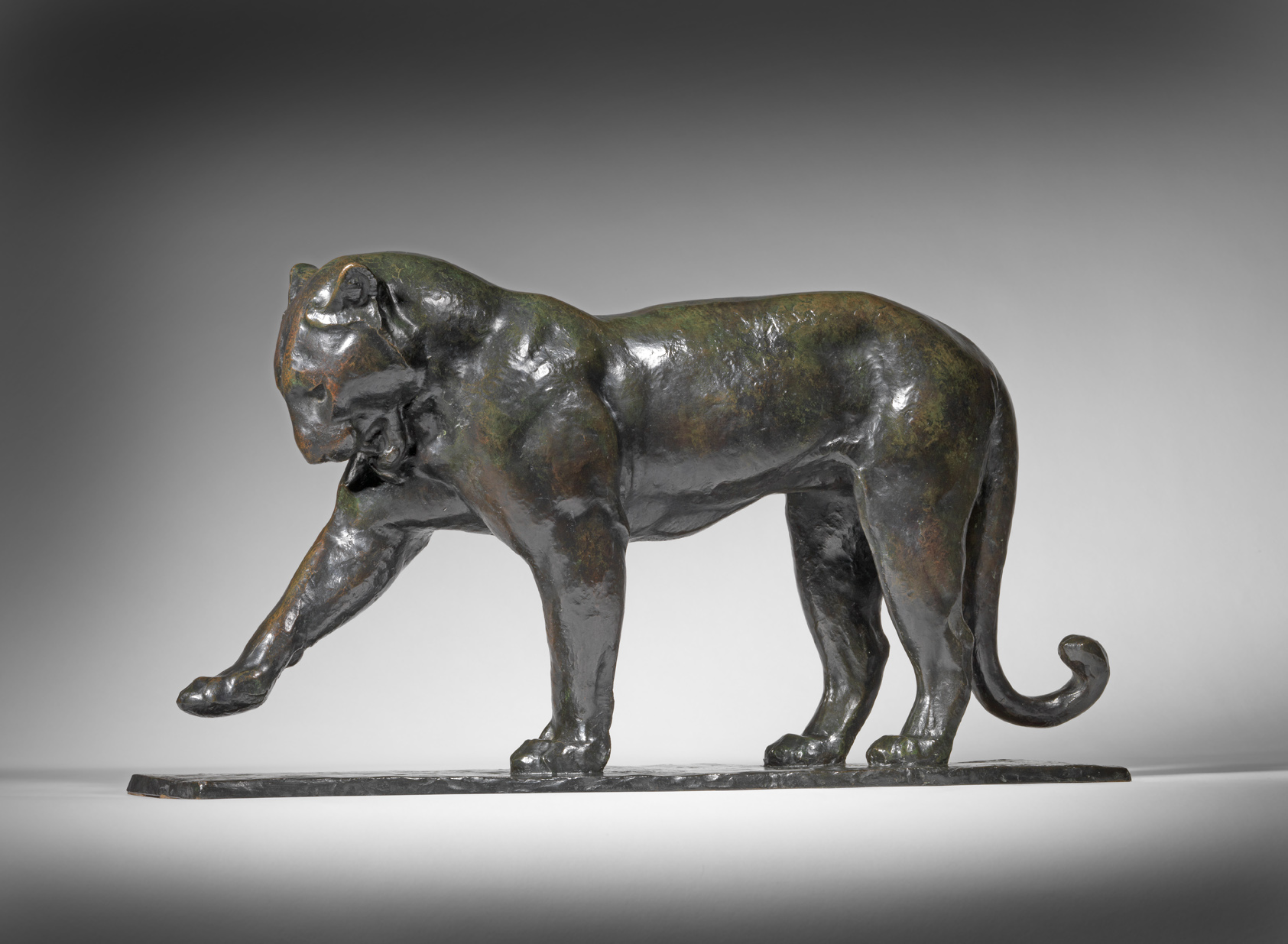