Willy Zügel was born in Munich on 22 June 1876. He was the son of the well-known Impressionist animal painter Heinrich von Zügel, an important figure in Munich’s art scene and a strict teacher. From 1898 until 1903, Zügel studied painting in his father’s class at the Munich art academy. As well as working with live horses and cattle in the studio of the academy, Heinrich took his students to Wörth am Rhein every summer to study animals outdoors in natural light. Yet Willy was seemingly more interested in form than in colour, and thus more inclined to sculpture than to painting. In 1903, he began his career as a self-taught sculptor. Success followed swiftly: from 1904 onwards, his work was shown in numerous exhibitions in Berlin, Bremen, Dresden, Cologne, Munich, Vienna, Budapest and elsewhere. In 1905, the Nationalgalerie in Berlin was the first museum to buy some of his sculptures, two pelicans and a giraffe in bronze, which had been on display in the Grosse Berliner Kunstausstellung; a condor was acquired the year after. Other museums such as the Städtische Galerie im Lenbachhaus in Munich, the Kunsthalle Bremen and the Museum of Fine Arts in Budapest also bought his animal sculptures.

He became a member of the Munich Secession in 1910, and was awarded a gold medal at its international exhibition in 1913. Commissions such as two heraldic animals in stone for the assembly hall in Stuttgart in 1910 and a monument for the politician and alpinist Theodor Christomannos, to be erected in the Dolomites the following year, further spread his reputation, as did the fact that several of his animals were manufactured by renowned porcelain factories such as Philipp Rosenthal, as well as Nymphenburg and Meissen. In 1926, he was awarded the title of Professor of Fine Arts by the Bavarian ministry for education and cultural affairs.

Like his father, Zügel divided his time between Munich and Murrhardt, a small town near Stuttgart where the family had a farm on which they usually spent the summer. Various animals were kept there as models for father and son, including birds of prey and tame deer, while game animals could be studied on hunting trips in the woods nearby. But although his father specialised in native animals, Willy did not limit himself to these. A trip to Paris in 1909 enabled him to study wild animals from elsewhere in the menagerie of the Jardin des Plantes, and presumably also the abundance of animal sculptures in the city’s museums and public spaces. Visits to circuses and zoos in Munich, Berlin, Dresden, Hamburg, Düsseldorf and St Gallen over the following years also offered him exotic models. He studied the live animals with great care, and his sculptures are naturalistic accounts of his models. Their course of motion usually interested him more than the structure of their plumage or fur. The slight movement he often captured adds to the liveliness of many of his works. He was not interested in following any of the new ‘-isms’ of his time, and the wish to break up forms or to leave behind nature as the point of origin was alien to him.

Despite the fact that Zügel created a number of monuments and memorials as well as several portrait busts, most of his oeuvre consists of animal sculpture on a small scale, fuelled by his admiration for the animals themselves, and intended for the enjoyment of the viewer. 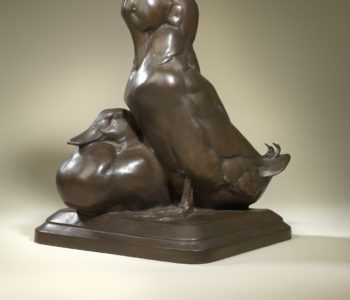