Rosalie Bonheur (called Rosa) was born in Bordeaux in 1822, but moved with her family to Paris in her early youth. Her father was a landscape artist but he decided against an artistic career for his elder daughter. He apprenticed Rosa to a seamstress, but as she had neither the temperament nor the aptitude for this work, she eventually persuaded her father to allow her to study art and attend his drawing classes, as well as studying further with the painter Leon Cogniet.

Rosa Bonheur is classified as an Animalier sculptor on the strength of under a dozen works, mostly modelled prior to 1845, when she won the Gold Medal for painting at the Salon. At this time, she received an important commission from the State, and as a result her celebrated career as a painter began. The admiration for her work and the esteem in which she was held was unusual for a woman in the nineteenth century. Often considered to be the ‘Landseer’ of France, she received many decorations and awards. She was on personal terms with the Crown and officials of State and her home was protected by the army during the siege of Paris under orders from Prince Frederick. In England, too, she enjoyed the friendship of Queen Victoria and other noble patrons.

Rosa’s success lay in her ‘natural’ portrayal of animals. Where possible she worked directly from nature, travelling to the Pyrenees and the Scottish Highlands, and spending time in the countryside surrounding Paris and its slaughterhouses. When working she adopted men’s clothing – the beret, baggy trousers and blouse of the Breton countryside. Despite this eccentric garb, she was a respected and notable person, attracting clients of importance through her own admiration for the arts and through her strength of character and personality. Whether her eccentricity was studied or genuine, it did not go unnoticed and may well have been instrumental in her success. She established a career for herself as a professional painter, a considerable achievement for a woman at that time.

Rosa Bonheur’s work was understandably very popular in Victorian England, a country she visited on numerous occasions. In 1853 she went to the Highlands of Scotland, where the landscape had a profound influence on her work. Records show that she certainly did meet Landseer, but whether on this visit or later is not known. In a letter of 1856 she wrote that ‘he is the greatest painter of animals and I believe that he will remain the greatest of his kind’. 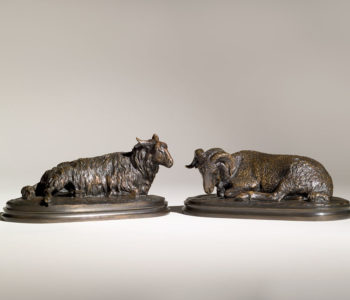 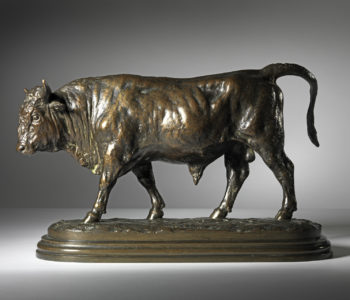 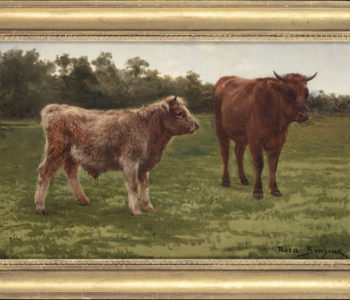