Ludwig Vordermayer, born in Munich on 25 December 1868, came from an artistic family. His father was the sculptor Hans Vordermayer (1841–88), who specialised in woodcarving. Hans created religious figures and interior decoration and taught at the school for carving and sculpting in Partenkirchen in Bavaria. Hans had two brothers: Rupert (1843–84) was a painter, while Mathias (1850–94) was also a sculptor, working in wood and marble. Mathias moved to Berlin in 1878 and became the most successful of the three brothers. He got involved in prestigious projects such as sculpting several figures for the Reichstag, the new seat of government in Berlin, erected between 1884 and 1894. Possibly it was due to Mathias that Ludwig moved to the German capital some years later as well.

Vordermayer attended the school of the museum for applied arts in Berlin from 1888 to 1890. He then worked in the studio of the sculptor Peter Breuer, and became from 1891 to 1894 a student of Karl Begas, the youngest brother of the famous sculptor Reinhold Begas. Vordermayer began to exhibit his works at the Grosse Berliner Kunstausstellung, the Berlin salon, in 1893, and also regularly showed at the annual exhibition at the Glaspalast in Munich. In 1900 he became a member of the Verein Berliner Künstler, the most important artists’ society in Berlin at the time. Most of his works are realistic animal sculptures, but he also modelled portrait busts and genre figures as well as funerary and memorial sculptures, the majority cast in bronze. Kaiser Wilhelm II apparently valued and supported his work. Among Vordermayer’s best-known sculptures are figures of a cockerel from 1903, a nude warrior with a spear standing next to his horse, which he modelled in 1905, and several individual ravens from 1909. Both the Nationalgalerie in Berlin and the Kunsthalle Hamburg own casts of the cockerel and one raven. Among Vordermayer’s most ambitious and most prominent works are two life-size sculptures of an elk which he created for the East Prussian cities of Gumbinnen and Tilsit (now Gusev and Sovetsk, in Russia) in 1910/1911. He died on 20 June 1933 in his home city of Munich. 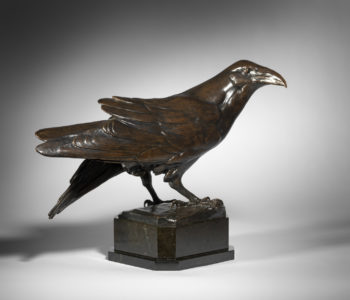