Irénée Rochard was born in Villefrance-sur-Saône on 16 January 1906. In 1924 he moved to Paris to study Decorative Arts, with Serge Zelikson and René Dubois amongst others. Upon leaving the École des Beaux Arts he presented his first important work, a panther in ‘grandeur nature’. He was a friend of François Pompon and an admirer of Édouard Marcel Sandoz, and between the wars he frequently met with the circle of Animalier sculptors practising at the time. His work oscillated between marked stylisation and a more naturalist style. He exhibited regularly at the Salon des Artistes Français, becoming a member in 1938. He received a medal of honour from the society in 1980 and many other awards during his lifetime. For the most part his oeuvre was Animalier; in paying homage to the animal kingdom, he depicted hundreds of animals. The city councils of Paris and New York purchased a number of his works, but Rochard himself remained in Paris until his death on 29 March 1984. 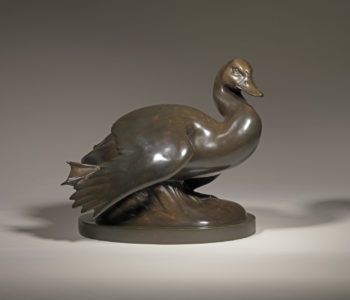