Fernando Botero was born in Medellín, Colombia, in 1932 and attended a Jesuit school in addition to taking classes to become a matador in his childhood years. He took part in an exhibition as early as 1948 when he was also contributing illustrations to the Sunday supplement of the daily newspaper El Colombiano. He worked briefly as a set designer before moving to Bogotá in 1951 where he held his first one-man show within a few months of his arrival. From 1952 to 1954 he travelled and studied in Europe, staying in Barcelona, Madrid, Paris and Florence. He began to exhibit in USA in 1957 and bought a studio in New York in 1960. His characteristic style of painting emerged in the 1960s and was fully developed by the time of his important show at the Milwaukee Art Center in 1967.

The treatment of form and scale which is essential to his work as a painter naturally led to developments in sculpture which Botero began to produce in his Paris studio from 1973. He devoted the years 1976-77 exclusively to making sculptures which were the dominant theme of his major exhibitions in 1977 and 1978. The size of these sculptures subsequently increased to the monumental proportions first shown in 1985 and seen at a series of vast open-air displays in major cities throughout the world in the 1990s. One of Botero’s colossal public sculptures, the Broadgate Venus, was unveiled in London’s Exchange Square in 1990. 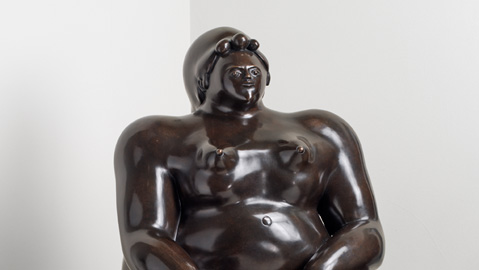