Waagen, who was born at Memel in Prussia, was a little-known German Animalier and orientalist figurative sculptor. Early in his career he moved to Paris, where he settled permanently to persue a career as a sculptor. His studio was based at 40, Cours de Vincennes, east of Place de la Nation. Inspired by the trend for the oriental, he exhibited several works with north African themes at the Paris salon from 1861 to 1887.

Waagen showed a plaster group of ‘Pheasants’ in the Salon of 1869. The Sheffield Museum owns his sculpture group of ‘Shepherds, Dogs and Dead Mountain Lion’. His other animal subjects include Greyhound and Cat and Standing Hound. A mounted, North African Arab huntsman with dogs, called ‘Kabyle Returning from the Hunt’, was edited in at least four sizes by the foundry L. Martin, and was produced both in bronze and gilded bronze. 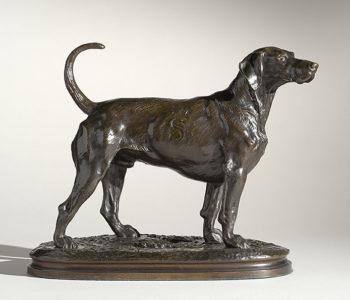