Vernon March was born in Sutton, Yorkshire. He worked as an oil miller and then as a builder’s clerk when the family moved to London around 1900. Eight of the March children became artists. They lived and worked for most of their careers at the family home in Kent.

In January 1926, Vernon won the competition to design the National War Memorial of Canada in Ottawa. His winning design was for a memorial arch surmounted by Peace and included a large group of twenty-three figures, representing the eleven branches of the Canadian forces engaged in the First World War. Work on the memorial began in 1926. Sadly, Vernon died of pneumonia in 1930 before completing the commission. Six of his siblings finished the large figure groups by 1932. 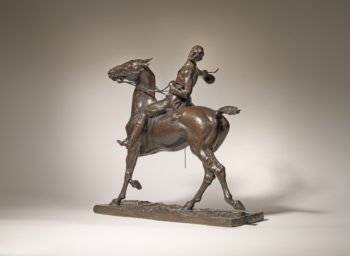