Renée Sintenis, born Renate Alice Sintenis on 20 March 1888 in the city of Glatz in Lower Silesia (now Kłodzko in Poland), began her artistic career with private drawing classes as a young girl. Aged nineteen, she enrolled at the school of the Museum for Applied Arts in Berlin and studied ‘decorative sculpture’ with Wilhelm Haverkamp. At her father’s insistence, she left the school after five six-month semesters and reluctantly began work as a secretary in his law firm, but soon left the job and broke off with her family. In 1910, Sintenis began to pose for the sculptor Georg Kolbe, and also, soon after, for the painter and illustrator Emil Rudolf Weiss, her future husband. The contact with Kolbe clearly influenced her own art: the female figure was a favourite subject of Kolbe’s, and when Sintenis began to exhibit her sculptures publicly in 1913, most were female figures. These early works are slender, elegant and graceful – characteristics found in most of her works, regardless of whether they depict animal or human.

Soon after this first exhibition, animal sculptures began to dominate her work, interspersed with portrait busts and depictions of athletes. Sintenis started to become successful: her works were exhibited in different cities in Germany, as well as abroad, in Paris, London, Brussels and New York; and the art dealer Alfred Flechtheim effectively promoted her work. Her sculptures entered private as well as public collections, she was well connected in the Berlin art scene, she became friends with writers including Rainer Maria Rilke and Joachim Ringelnatz, and she won prizes. In 1931 she was elected a member of the Prussian Academy of Art in Berlin, the first female sculptor and – following Käthe Kollwitz – only the second woman artist to be admitted.

When the National Socialists under Hitler came to power in 1933, Sintenis was expelled from the academy, but was permitted to continue to work, which she did reclusively. She lost works of art and most of her belongings during the Second World War when her house and studio were destroyed in an air raid in 1944, although a number of bronze models survived at the famous foundry of Hermann Noack, who hid them in the casting pit. After the war, Sintenis was appointed as a teacher at the Hochschule für Bildende Kunst in Berlin, and in 1955 she received the title of professor. In the same year, she joined the re-established Academy of Art.

Just as the time of the Weimar Republic had been before Hitler’s rise to power, the 1950s was again a successful period for Sintenis, and she was strongly identified with Animalier sculpture in Germany. She was decorated with many German awards and medals, including the Grand Cross of the Federal Cross of Merit and the Pour le Mérite. Animals continued to dominate her oeuvre, the most famous being the ‘Berlin bear’, which is the prize at the annual Berlin film festival: a first version was modelled in 1932, and a second version, created in 1956, is still used today. Sintenis died on 22 April 1965 in Berlin.

Most of Sintenis’s work is executed on a small scale, and cast in bronze; some pieces are cast in silver, and a few are terracotta. Almost all of her figures are delicate yet very lively creatures, and many of the animals appear eminently playful. Among the predominantly domestic beasts such as horses, deer, goats and dogs are many young animals, which Sintenis captured in their early awkward movements. Her sculptures always remained realistic even when she stylised their forms; they often seem like sketchy impressions while at the same time accurately portrayed renderings of movement and behaviour. 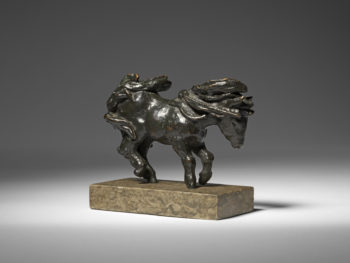