Leon Marcel Marceau was born in Paris in 1892.  The fact that he did not show great learning aptitude, coupled with the relative poverty of his family meant that he left school aged 15 and became a postman. At the outbreak of WWI he was mobilised and served in a cavalry unit of the French Army. Early on however, he was severely wounded and left partially deaf so was discharged and made exempt from further army service. The war had a big mental effect on him in addition to his physical injuries. He never married and whilst he had a lot of friends, he stayed a solitary character until his death.

Perhaps in reaction to the horrors of his war, he became enthralled by the animal realm and started taking classes in Paleontology and Comparative Anatomy at the Musée d’Histoire Naturelle de Paris. In his free time he soon began visiting the Jardin des Plantes and tried his hand at sketching and painting the animals. The fact that he chose for himself a nom de plume, ‘Lémar’ – cobbled from his first name Léon and last name Marceau – indicates that he saw this as a new start in his life and for the first time himself as a bona fide artist.

As they were both regulars of the Jardin des Plantes, it was inevitable that he and François Pompon would eventually meet. Sharing the same interests, they quickly forged a deep friendship.  It is largely credited to Pompon that his encouragements helped Lémar to develop an artistic confidence towards sculpting the zoo residents in addition to just capturing them in drawings. Lémar also frequently visited the Louvre in order to study the work of other sculptors, not just those from Europe but also China and Egypt. From 1925 Lémar began to concentrate solely on sculpture and for the first time exhibited two plasters at le salon des Indépendents, entitled ‘Cormorants’ and ‘Hippopotamus’.

In 1931, Pompon created ”le groupe des douze sculpteurs animaliers français”, which included artists such as Paul Jouve, Marcel Lémar and Georges Guyot. The first exhibition of this ‘group of twelve’ was held at the Hôtel Ruhlman in 1932 and Lémar presented two bronzes, a turtle and a bittern, as well as several sketches. In 1934, the newly re-designed Zoo de Vincennes re-opened which had been re-engineered in such a way that the animals are not seen through iron bars, but were in enclosures surrounded by impassable ditches, allowing them to behave in conditions much closer to their natural habitat. Vincennes became a regular haunt for Lémar and the remaining Animaliers from the group, as Pompon had died the previous year. Spurred on by the opportunity to observe all these new non-indigenous species, Lémar produced many new works.  One of his particularities is that he eschewed the more conventionally ‘noble’ animals, like the big cats and concentrated mainly on amphibians, birds and primates.

He never dated his sculptures, but over the years, his style become purer, while never reaching the complete absence of angles favoured by Pompon. Progressively, and in direct consequence of his knowledge of anatomy and paleontology, he aimed to depict not just the animal in front of him but the whole evolutionary course of that species. To avoid anthropomorphising his subjects he devoted himself to primates, who naturally exhibit human traits, which he studied with dedication and rendered with style.  With his seated orang-utan for example, it is easy to imagine the slightly puzzled but nonetheless amused animal sat in front of the sculptor, such is his quizzical demeanor so perfectly captured.

Despite being hailed as one of the most promising Animalier sculptors of his time as well as exhibiting regularly, Lémar was never able to live solely from his art, and remained working for the post office. When WWII broke, the injuries he sustained in 1914 prevented him being called up. Still living in Paris, he was unable to withstand the stress caused by the German occupation and, in October 1941, he took his own life. It was a deliberate act, as he had established a careful will with clear instructions about how to dispose of his oeuvre and what sort of burial he wanted (a simple private ceremony, no flowers, no obituaries).  Most of his work was to go to the French state, and the revenues from the portion which he allowed to be sold was to be distributed amongst struggling artists. The Salon Des Indépendants organised a posthumous show in his honour in 1942. His work can be seen in many French museums such as: Musée de Cambray, Musée d’Art Moderne de la Ville de Paris, La Maison de la Chasse in Paris, Musée Mandet in Riom, etc. 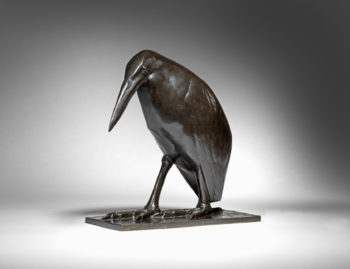 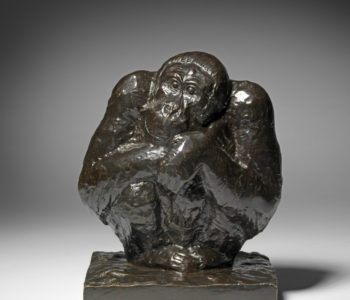 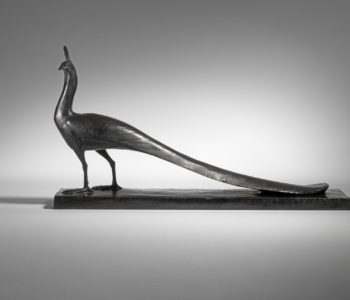