The German sculptor Wilhelm Hüsgen was born in Barmen, Germany in October, 1877. After attending vocational school in Barmen from 1887-1893, Hüsgen studied architecture with his father Fritz. He was then instructed by Wilhelm Giesecke (and for a short time Gerhard Janensch) at the Städtischen Handwerker und Kunstgewerbeschule in Barmen, where he developed his interest in and talent for sculpture.

In 1899, Hüsgen moved to Munich where he mixed with some of the influential young artists of his generation. Among other projects, he designed masks for the cabaret “The Eleven Executioners”, exhibiting a skill for modelling faces.

Just two years after his move to Munich, Hüsgen founded the Phalanx School of Painting and Sculpture along with Wassily Kandinsky, Rolf Niczky, and Waldemar Hecker. With Kandinsky as their director, the school was in opposition to the conservative views of the Academy. Their aim was to help young artists overcome obstacles in exhibiting new styles of work. Phalanx organized twelve exhibitions between 1901 and 1903, which featured Jugendstil (Art Nouveau) artists, Symbolists and Post-Impressionists. Those represented include Claude Monet, Paul Signac, Felix Vallotton and Henri de Toulouse-Lautrec. Despite the interest of such impressive artists, the school was dissolved in 1904 due to lack of public support.

Hüsgen taught at Phalanx until 1903, when he returned to Barmen as an established artist to work on commissions for sculpture and portraits. It was during this time that he created Beethoven, one of his most famed sculptures. 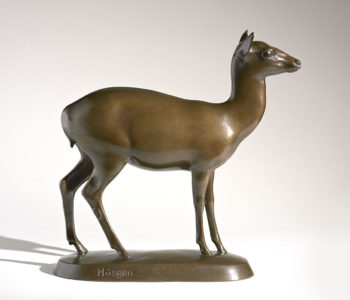