Louis-Theophile Hingre was born in Ecouen, in Val-d’Oise France on 19th November 1832. he began his career as a sculptor and engraver of metals but was, in the main, an Animalier, completing a number of plaques, small groups, statues and reliefs.

He began exhibiting at the Salon in 1863 and over the next four decades he showed a number of pieces including in 1868 a Chicken in bronze and silver; 1877 a Family of Partridge; 1898 The Young Rabbits (relief); and some plaques and figures of various animals in 1903 and 1906. Hingre received an honourable mention at the Salon of 1891 and won a third class medal in 1902. 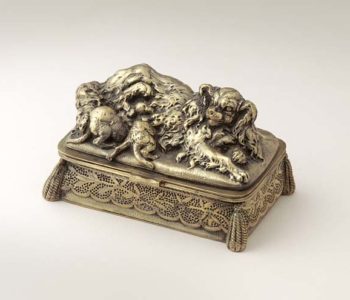