The Animalier sculptor Ary Jean Léon Bitter was born in Marseille in 1883. In 1895 he started art school where he was taught by Jules Coutan and Émile Aldebert.  During his time at art school he won a prize for sculpture in 1900 and in 1901 he received awards for both sculpture and design. In 1902 he moved to Paris where he joined the studio of Louis-Ernest Barrias. Several years later, in 1906, he was admitted to the École nationale supérieure des Beaux-Arts.

In 1912, he exhibited at the Salon des Artistes Français where he was to remain a regular exhibitor until 1939. He won a bronze medal at the 1913 Salon and the silver medal at the 1921 Salon.   In 1921, he worked on various war memorials in Sanary-sur-Mer and those in the Marseille cemeteries of St Louis and St Jérôme. In 1924 he was awarded the gold medal  at the Paris Salon and the following year, in 19125,  he was one of the sculptors featured by the Susse Frères foundry in an exhibition at Boulevard de la Madeleine. In 1926 he worked on the decoration of Marseille’s St Charles station and executed the piece ‘Bonne Mère’ for the Cathedral.

During the Second World War, in 1937, he was awarded a gold medal at the ‘Exposition Internationale des Arts et des Techniques de Paris’ and he was invited to show work at the “Palais de la Céramique” and the “Palais du Métal”. In 1938, he created  ten terracotta works for the Musée Hector-Berlioz in La Côte-Saint-André. Ary Bitter died in Paris in 1973. 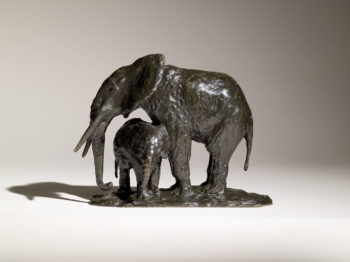