The Flemish sculptor Albert Poels was born on 7th April 1903, in Belgium. His father, Jan Poels was an established painter and decorator of interiors and architectural facades who had studied at the Royal Academy of Arts in Antwerp. Albert was introduced to sculpture in his father’s studio, where he was encouraged to knead clay and model.

After attending the local school, Albert continued to attend the Royal Academy of Arts in Scheldt for 6 years, taking classes in the evenings with the sculptor Josue Dupon who made a considerable impression on the young artist.

In 1929 Poels married Raymonde Geeraerts with whom he had five children. The same year he went on to exhibit his work in Antwerp. A publication of the time ‘Arbeid en Vermark’ published a contribution by G. Stoclet which describes Poels work as daring.  The following year Poels and his father received some commissions to work on the World exhibition in Antwerp. Albert made the composition ‘Comfort’ for the Trade Unions Pavilion. It represents a dock worker supporting his weak brother.

Prior to the Second World War Poels established an art group ‘Het Getij’ with the painter Edmond Van Dooren of which he was president until he was seventy years old. In 1965 these two artists held a retrospective exhibition in Breda, the Netherlands, with 111 works by Poels alone.

Poels’ career spanned 50 years, during which time he sculpted in wood, stone, marble and bronze. His sculpture simplifies and refines reality often showing optimism and wit. His early career is defined by smaller, stylized works, inspired slightly by the cubist movement. Many of these are animal studies which depict sparrows, vultures, pigeons, herons and cats. He regularly visited Antwerp zoo to gather source material for his sculpture. 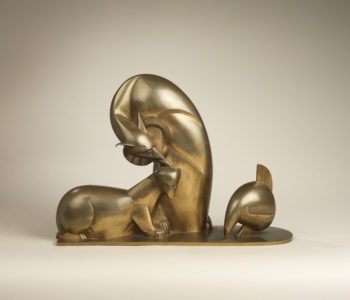